Recently I wrote a blog article on splash screens for Android apps. I didn’t take the time then to build a simple demo app with source code so I’m doing so now.

There is not really much to my Splash Demo app. I took the basic Hello world app and added a splash screen. The splash screen stays visible for about 5 seconds and then switches to the Hello activity. The app looks like the following: 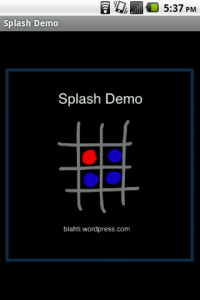 Download the source code for the Eclipse project from this page at wglxy.com:

If you find that the app does not build in Eclipse, be sure to do a clean build by using the “Clean” item on the Project menu. The project was built with Android 2.2.

Here are steps I took to build this demo app.

The onCreate method of LauncherActivity is the place where the transition to the main activity happens. It does two things. It sets up to handle clicks on the image view showing the splash image. That provides a user with a quick way to skip the splash screen. The second thing onCreate does is start a second task. The GoHomeAfterDelay class is a subclass of AsyncTask. It runs in the background, or, in this case, it sleeps in the background. When it awakes, the task finishes and triggers a call to start the main activity. Note also that I put the actual time of delay, 5000 milliseconds, in a values.xml resource file as the integer named splash_screen_time.

The GoHomeAfterDelay class is a subclass of AsyncTask. Its definition is at the bottom of the LauncherActivity.java file. GoHomeAfterDelay’s doInBackground method does nothing more than go to sleep for the time specified. Part of the protocol for any AsyncTask involves executing its onPostExecute method when the task completes. So that’s the spot where we end the launcher activity and start the main activity.

If you are unfamiliar with AsyncTask and the reason for it, I refer you to two earlier blog notes:  AsyncTask note , Long Computations note.

The place where MainActivity is actually started is in the goHome method. It uses an Intent to start the activity. After that, there is a call to the finish method. That’s what stops the LauncherActivity and keeps it from showing up again when you hit the Back button.

As I said earlier, there are several good articles about splash screens already out there. My favorite is the one on “Android Splash Screens Done Right“. Thanks go to Mr. Clifton for sharing this very useful information.

Bill Lahti is an indie game developer. He is currently working on Lifeforms, a two-player game based on Conway’s Game of Life. Other iOS and Android games: Double Star II, Wing Leader, Gomoku League.
View all posts by Bill Lahti →
This entry was posted in Android and tagged android, splash, ui. Bookmark the permalink.

This site uses Akismet to reduce spam. Learn how your comment data is processed.